If you would like to read the previous and more recent issues about native grasses : Index at http://www.ecoseeds.com/juicy.html

--Implications for biodiversity, conservation and taxonomy

--Ecotypes and who needs them

Ecotypes are no secret! Ecotypes are biological realities known for 116 years in Europe and 90 years in America. One hundred years ago, researchers perplexed by the variations of species found in extreme environments, collected specimens from the Alps and the sea coasts, grew them in common gardens, and confirmed that extreme environments created genetically fixed ecotypes.

What can ecotypes teach us about the environment? This ecotype question isn't just a troublesome thing to work out, but rather ecotype knowledge will be valuable to a lot of scientific disciplines. Ecotype knowledge will be useful for geneticists, taxonomists, the evolutionary sciences and ecological restoration practitioners; and will be critical for discussing biodiversity and conservation.

When the environment bends a biome's genetics, the grasses are among the first to bend, at least in an immediately obvious fashion. The ability to read ecotype variations in grasses is like having a key to translating the ecotype language for all the plants in an area. Native grasses, as sensitive ecotypic indicators, can become as important for studying native plant genetics as the fruit fly is indispensable for the study of animal genetics.

IMPLICATIONS FOR BIODIVERSITY CONSERVATION and TAXONOMY.

The Linnean classification system of genus and species limits our view of life to think of plants and animals as scientific bionomial names. The Linnean system can give us a false confidence that as long as you know the species, you don't need to look further, and it restricts our ability to conserve and protect biodiversity in plant communities. We need the ability to express ecological adaptations of a species to a particular habitat. Grinnell & Miller (1944) were able to accomplish this with birds when they related bird subspecies to life zones and ecological formations. Their Screech owl and Song sparrow subspecies are the equivalent of bird ecotypes. The conservation of biodiversity needs attention below the species level, to the ecological level, to the ecotype level.

Study of native grass ecotypes will renew Clements, Turesson, Gregor and Lawrence's idea of creating a new taxonomic language relating the species and its ecotypes to the habitat that created them. Frederic Clements, America's first major ecotype researcher, wrote in 1908 that species have a connection to their environment. Clements' contribution changed the concept of species. No longer would a species just be an assemblage of morphological structures. Through ecotypes, he reconnected species to their habitats.

Focusing on the relationship between species and habitat, Gote Turesson wrote in 1925, "With the increase in our knowledge of ecotypes, now in its beginning, a natural system of life forms will doubtlessly be built up. There can be no doubt as to the great importance of such a system for the understanding of the interrelations of plants and their habitats..."

Ecotype taxonomy would be useful for the ecologist and ecological restorationist to discuss the variations they have encountered and are working with. Four years ago, Theunissen (1992), a researcher in South Africa, began investigations of grasses with the goal of creating such an ecotype classification system. We will all eagerly await the results of Theunissen's work.

Ecotype knowledge is valuable for the ecologist and ecological restoration practitioner. Knowing what constitutes a local ecotype, what makes it important and how far away it can be moved will give certain practitioners a distinct economic advantage. The person with ecotype knowledge and understanding about the complex union between species and site will have an edge over other restorationists who only know what species to plant.

1.) Typical woodland form, that all other ecotypes were compared with.

4.) Windswept coastal bluffs or windswept hilltops, the most variation within a pop.

7.) Boundaries between two biomes, like the point of contact between a grassland and a forest, or woodland and desert, etc.

8.) Areas of known endemism for other species, 99.9% chance of a unique population.

9.) At the low of high annual precipitation area for the species.


COMMON GARDEN LOOK AT ECOTYPE GENETICS. Conducted by planting different populations of the same species in the same environmental conditions. If the populations are genetically uniform, the plants will grow out in a uniform manner, with the same height, flowering dates, leaf widths, and plants looking identical. Variations between populations are called "ecotypes" and are created by the plant's interactions with its environment, and those differences can be seen below for one California native species, Bromus carinatus from the San Francisco Bay area: 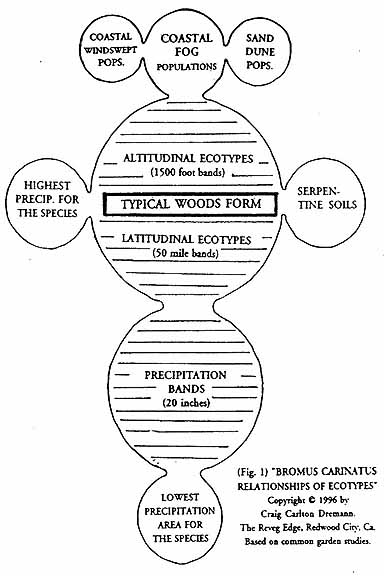 Native grass ecotypes show what I call spatial evolution, or evolution flowing over geographic space, with the genetic material flowing over the land and molding itself to particular soils, rainfall, elevations, or other environmental conditions. Folds and creases in the land make folds and creases in populations---creating spatial evolution and unique ecotypes. Ecotypes on the fringe of the species' range will undoubtedly transform themselves into new species over time.

Another fascinating possibility Turesson (1925) considered was that with ecotypes, we may be able to discover the center of origin of native plant species. Utilizing Turesson's ideas and those of Vavilov (1951) for finding the centers of cultivated plants---the centers of origin for native species might be found.

ECOTYPES and WHO NEEDS THEM?

To rebuild the natural environment around us, ecotypes will be the bricks we will need for the foundations:

Farmers, ranchers and orchard managers who covet their topsoil; to keep topsoil in their fields, out of streams, to control water pollution: they'll need native ecotypes.

Miners with a desire to revegetate mined areas according to the California Surface Mining and Reclamation Act of 1975, they'll need help from the ecotypes.

Caltrans (California Department of Transportation) and other highway departments, wishing to stop the herbiciding along roadsides, and to plant vegetation that is low-growing and low maintenance and keeps out weeds; they'll need to study the local ecotypes.

The Forest Service and BLM, wanting to keep serpentine roadcuts, granitic ski slopes and abandoned mines from eroding and washing into streams and lakes; they'll depend on local ecotypes to hold those slopes together.

Ecotypes can furnish endless applications for bioremediation and their knowledge can create whole new areas of biological research. Ecotype knowledge will be as startling and useful to us, as the knowledge of antibiotics was useful for the practice of modern medicine. To guarantee the possibilities of this future, we need to begin the preservation of native grass refugia.

The concept of setting aside Native Heritage Preserves throughout the United States could be developed state-by-state, with a baseline of one for every 225 square miles. For example, you would divide the area of Maryland (12,407 square miles) by 225, then a minimum of 55 refugia would be needed for that state. This formula would even work well in small states like Hawaii where there is known to be a large amount of biodiversity: a minimum of 48 refugia for the island chain. We need to start thinking now: "what is the minimum we are going to preserve for the future?"

Within these preserves, or refugia, we would be banking future genetic material, models of the community structure, and wonders for future generations to discover. These preserved refugia, like the relict areas in India researched by Gadgil & Vartak (1976), may end up being the only intact examples of native ecosystems in the future. We when we preserve 680 relict refugia for California's future, this only represents one acre in exchange for every 10,000 we've taken for our own use.

Every seed company that sells native grass seed and every person who plants native grass seed or plants depends on the existence of the relict grass stands for their original genetic material. Now is the time for the relict stands to depend on us, for their continued survival. In exchange for the gifts they have given us in the past, we must guarantee that their gifts will be available for the future.

1895. Genslow, G. The Origin of Plant Structures by Self-adaptation to the Environment. London.

1905. Greene, Edward L. Revision of Eschscholtzia. PITTONIA 5: 205-293. This is the first detailed botanical description and key to ecotypes and their geographic ranges of any genus of plants. Greene lacked the concept and term "ecotype", which was not invented or commonly used until two decades later; so Greene organized his eoctypes into 112 "species". His work has been generally ignored and even scoffed at, because taxonomist even to this day do not want to believe that there are possibly 112 species of California poppy. But if we now recognize his "species" as ecotypes, then it makes his paper an important historic and pioneering document: valuable for conducting ecological restoration of California wildlands, today and far into the future.

1921. Hagedoorn, A.L. and A.C. The Relative Value of the Processes Causing Evolution. The Hague.

1925. Turesson, Göte. "The plant species in relation to habitat and climate." Contributions to the knowledge of genecological units." HEREDITAS. 6: 147-236

1945. Clausen, J., D. D. Keck and W. M. Hiesey. Experimental Studies on the Nature of Species. II. Plant Evolution Through Amphiploidy and Autoploidy, with Examples from the Madiinae. CARNEGIE INST. WASH. PUB. No. 564.

1946b. Mason, H. L. "The edaphic factor in narrow endemism. II. The geographic occurrence of plants of highly restricted patterns of distribution." MADRONO 8:241-257.

1946. Turrill, W. B. "The Ecotype concept: A consideration with appreciation and criticism, especially of recent trends" NEW PHYTOL. 45: 34-43.

1950. Kruckeberg, A. R. An experimental inquiry into the nature of endemism on serpentine soils. Ph.D. Thesis, Univ. California Berkeley.

1953a. Hiesey, W. M. "Comparative growth between and within , climatic races of Achillea under controlled conditions." EVOLUTION 7:297-316.

1963. Bjorkman O. and P. Holmgren. "Adaptability of the photosynthetic apparatus to light intensity in ecotypes from exposed and shaded habitats." PHYSIOL. PLANT. 16: 889-914.

1963. Merxmueller, Hermann. "The incompatibility between formal taxonomic recognition of units and their biosystematic definition." REGNUM VEGETABILE 27: 57-62

1966. Kwano, S. "Biosystematic studies of the Deschampsia caespitosa complex with special reference to the karvology of Icelandic populations." THE BOT. MAG., TOKYO 79:293-307.

1966. Strain, B. R. and V. C. Chase. "Effect of past and prevailing temperatures on the carbon dioxide exchange capacities of some woody desert perennials." ECOLOGY 47:1043-1045.

1966a. Bjorkman O. "Comparative studies of photosynthesis and respiration in ecological races." BRITTONIA 18:214-224.

1982. Antonovics, J. and R. B. Primack. "Experimental ecology and genetics in Plantago. VI. The demography of seedling transplants of P. lanceolata. JOUR. ECOL. 70:55-75.

1993. Dremann, Craig and Sue Dremann. "In search of native grass ecotypes in the San Francisco Bay Area. Part one: Let's find the edges and extent of the ecotype puzzle; setting up the study." GRASSLANDS 3 (3): 1-4.

1995. Kruckeberg, Arthur, Richard B. Walker and Alan E. Leviton, Eds. GENECOLOGY AND ECOGEOGRAPHIC RACES. Papers in the Biological Sciences Presented at the 73rd Annual Meeting of the Pacific Division AAAS on the Occasion of the 100th Anniversary of the Birth of Göte Turesson. Pacific Division, Amer. Assoc. for the Advancement of Science, Calif. Acad. of Sciences, San Francisco, CA. 285 pp. [A "MUST-HAVE" ITEM!] Only $28.95, hardcover on acid-free paper!