If you would like to read the previous and more recent issues about native grasses : Index at http://www.ecoseeds.com/juicy.html
IN THIS ISSUE:

Search Out and Preserve!

Native Plant Policy California BLM and How Local is Local?

EXPECT POOR TO MARGINAL crops due to below-normal rainfall in Southern California, (especially the deserts), Southern Nevada, Arizona, New Mexico, Colorado, Wyoming, Texas, Montana, Oklahoma, and southern Kansas. Along with the wild native grass seed crops, there will also be a very low yield of dry-land winter wheat in these areas.

KEEP A CLOSE EYE ON GRAZING in drought areas, so native stands are not devastated. Maintaining as much native bunchgrass cover on the land will help avert dust-bowl-like conditions that could develop. Watch for early and record temperatures along the U.S./Mexico borderlands and the U.S/Canadian borderlands in May through October which may exacerbate the lack of rain already stressing the native cover in these areas.

FIRE-REHAB. TEAMS should organize themselves early to discuss rehab. plans and prepare for numerous fires in the drought areas.
SEARCH OUT AND PRESERVE!

IT'S ALWAYS A GOOD YEAR to locate and map your perennial native grass resources, no matter what kind of year it is! If you are out in the field and find a good grass stand, start mapping it into a permanent database. Rather than looking for the 100 native grass stands that may exist in one 7.5 minute quadrangle, it would be more valuable to search, locate and protect 100 relic native grass stands in 100 different quadrangles! That will allow you to have a larger pallette of material available for future collection and study.

AERIAL PHOTOS are one way that I find grass stands quickly, especially if I have the location of a known stand for reference. Once you know what pattern to look for, you can survey huge areas for potential locations and likewise eliminate areas with low potential. That's how Gary Schoolcraft (Susanville BLM), Lynne Hosley (CH2MHill) and I discovered California's largest desert grassland in 1993, Lynne's Prairie, north of Susanville in the Madeline Plain, covering four contiguous beautiful square miles! It is only two miles west of Highway 395, but we would have driven right past it, never taking that side-trip down Broakman Road, never seeing it hidden by the surrounding alfalfa fields!
NATIVE PLANT POLICY OF CALIFORNIA BLM & HOW LOCAL IS LOCAL?

CALIFORNIA BLM will soon join the USFS Regions 5 & 6 (California, Oregon & Washington) in establishing a policy recommending the use of native plants for revegetation and ecological restoration. Among the next hundred questions that will arise, a few near the top of the list may be:

"What about the genetics?"
"Are there ecotypes?"
"How local is local?"
"How far can we move these natives--collect them from Utah and plant them in California, or keep the seeds within the US Forest Service Ecological Units?"

Native grasses are valuable tools to use when studying ecosystem diversity, and genetically they take the place that the fruit fly has for studying animal genetics. Native grasses grow quickly into mature, reproducing plants within 12-24 months and their simple structures can indicate ecotypic differences very clearly when grown in a common-garden.

Commercially reproduced, seeds of native grasses are the cheapest seed you can buy for ecological restoration projects. The ability to spread cheap natives around may ultimately be harmful to the indigenous relic stands. We need to go out and study the genetic architecture of those relics before we start spreading native grass seeds around in quantity.

BLM California and BLM Oregon as well as USFS and U.S. Military botanists collected samples of about one ounce of native grass seeds for our Isoenzyme gels. Participants for the 1996 Series III gels were:

The proteins are extracted from the seeds and the gels processed using esterase. The actual gels are a very thin layer (.001") of solid gelatin on a clear eight-mil. plastic sheet.

The genera that produce the clearest gel patterns are: Agropyron, Elymus, Oryzopsis, Sitanion, and Stipa. The desert species of native grasses are excellent candidates for genetic studies. 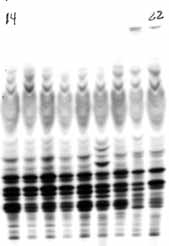 The Reveg Edge (sm) organizes samples for gel runs once or twice a year, whenever collectors have accumulated at least 70 native grass samples. Contact Craig Dremann (650)325-7333 for the next gel series deadline.

2.) Send a map of the area you might collect from for your gel samples, with your potential collection range (north/south/east/west) circled. A folded BLM or USFS 1:100,000 scale Surface Management Status or Forest map is best.

3.) One ounce of ripe seed is needed for the isoenzyme gels. There are several methods that you can use to tell when native grass seeds are ripe. The "thumbnail test" is where you press your thumbnail into the seeds and see how it yields; the harder the seed is, the riper it is. Another method is to collect seed from plants where the portion of the stem, where the seed is attached, has turned brown, indicating that no more nutrients will reach the seeds.

4.) #11 manila, 28 weight open-end policy envelopes are the recommended seed sample envelopes. They can be special-ordered from most stationary stores. They are a little larger than a regular mailing envelope, except that they open on the end, and you can get in and out of the envelope by just unfolding or folding the end, and they hold about one ounce of cleaned grass seed. Never use plastic! Use these envelopes or some other type of manila envelopes or paper bags to store your seed samples in.

5.) Agreements (Challenge-Cost-Share, P.O., etc.) need to be written, either a state-wide, or by individual Resource Area, Forest or Ranger District, so that I can organize your seed samples and cover the costs of preparing and running the gels.

In three year, I have received 1,228 native grass seed samples from the USFS!
I believe BLM and the U.S. military land managers have as much desire in using natives for ecological restoration and revegetation as the USFS

BOTANICAL EXPLORATION FOR ECOTYPES
Once you start looking for native grass ecotypes over a large area within one growing season, you begin to see variations in the populations that may tip you off that unique ecotypes exist and that there may be interesting environmental reasons for their existence. You will find as you survey that unique ecotypes always occur in areas of environmental extremes or at the boundaries between two biomes.

Extremes where unique ecotypes occur are on windswept hills, within five miles of a coastline, on weird soil types (serpentine, carbonates), sandy soils, in areas with known endemism, at the low or high rainfall edge for the species, at high elevations, in cold air pockets, or in isolated valleys.

Boundaries between two biomes could be the point of contact between a grassland and a forest, beach and coastal bluff, woodland and desert, subalpine and alpine, etc.

The Reveg Edge(sm) has developed a protocol for a search-pattern that can examine 5,000 contiguous square miles within a period of 14 field days for native grass ecotypes. This is the largest area that one person can reasonably cover in one season and still get an idea of the genetic diversity of the species of interest. COLLECTION DATA SHEET
Useful information for seed collections. This form can be copied and xeroxed onto 8-1/2"x11" Avery #5353 full sheet copier labels, which can then be cut and peeled to put onto your sample envelopes or collection bags:

Calling all Land Managers! Send in your top ten list of Not-Wanted Plants!
Send us a list of plants that have been intentionally planted in your area and have persisted, especially along roadsides. (Not the accidentally introduced weeds). Many of our highway departments, fire rehab. agencies, agricultural universities, and soil conservation offices are still recommending these plants instead of natives for revegetation of wildlands.

Send in your top ten list and I will publish it in Craig's Juicy Gossip Six,which will be about 'weeds.' Also, if you have an experience planting a non-persistent, non-native, let me know about those species! REVIEW: BOOKS & ARTICLES OF INTEREST
FOR ECOLOGICAL RESTORATION:

The publication is divided into two sections: The first part -- outlines what areas of knowledge we need to do successful ecological restoration:

The second part-- outlines the studies necessary to gain the knowledge we need, and has prioritized the research into small projects encouraging land managers to make accomplishments each year. Topic headings are:

Under section four, for example, the Plant Materials and Seed Technology section,
there are subsections A, B and C:

A. Ecotypes and Phenotypes.
B. Problem Diaspores.
C. Seed Priming.

Then, when you look up under the subsections, like Subsection A, Ecotypes and Phenotypes, there are five prioritized experiments you can do to answer questions about plant ecotypes. How easy can it get?! The dream ecological restoration cook-book!

The literature cited lists over 250 references, and there are interesting Appendices:

ARTICLE: Vanishing Grasslands. By Manfred Knaak, California State Archaeologist. January 1996 issue of the Resource Inventory Reporter, Anza-Borego Desert State Park, General Plan Team. Phone (619) 767-4879. Article hypothesizes that perennial grasslands may have been much more widespread in the Anza-Borego area, based on finding Native American grinding rocks, typically used for preparing acorn meal, far from any oak trees. It is suggested that the grinding rocks were used to process Indian Rice grass (Oryzopsis hymenoides) but those stands have been exterminated by grazing.

ECOTYPE EXPLORERS.
We may think that most of North America has been botanically explored, and that we know all the plants that occur here according to the Linnean classification system of genus and species. Unfortunately, the Linnean system limits our view of life to think of plants and animals as scientific binomial names, and to sort them out through morphological structures or genetically related categories. The Linnean system may give the restoration practitioner the false confidence that as long as you have an organism figured out to the species level, you don't need to look further.

Once we start exploring below the species level, the really exciting botanical exploration will begin. When you get involved in ecotype study and ecological restoration, you get a deep look at life and its relationship to its environment. You get an opportunity to read the fascinating and ancient stories that the environment has written into the genes and structures of the native plants and animals. You begin to discover how the plants and animals function with and have evolved with their environment.

Waves of native plant ecotype explorations occurred between 1895 and 1945, and stopped 50 years ago. We need to pick up where the elders ended 50 years ago and become the new Ecotype Explorers.

The new Ecotype Explorers will make remarkable discoveries about ecotypes and their functioning, but most exciting to me is that we will participate in creating the newest botanical language, forms of taxonomy, and be inventing new words to describe the discoveries of new worlds.