Intellectual Property Notice: You are welcome to reprint this data, for your own personal use. However, if you want to distribute, reproduce, modify or incorporate this data into another product including maps, you need to obtain a license for use. Craig Dremann owns the title, copyright, and other intellectual propertiy rights on this data, and the data is licensed, not sold. Reprinting the data or utilizing it for economic purposes including projects funded by grants, without obtaining a license, the user agrees to pay liquidated damages of $100 per mile. Use of this web site constitutes your acceptance of this agreement, and Craig Dremann reserves the right to change the terms and conditions under which it offers this site. - Licenses are available for use of the data by researchers, universities, or agencies at $8 per mile. 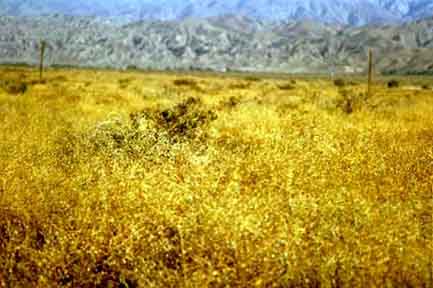 Sahara Mustard, U.S. National Wildlife Preserve, even the creosote bushes are covered! View from I-10 to NE. --- How can any Endangered Species live in that solid mustard patch?" 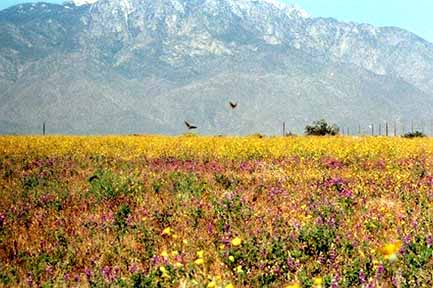 "Before" picture.
How the Coachella Valley National Wildlife Refuge looked pervious to the Sahara Mustard invasion, with the magenta colored sand verbenas in the foreground and solid wild sunflowers in the background. These are the last few remaining uninfested acres, in the far corner of the refuge. Looks like the "Garden of Eden" for Endangered Species, doesn't it? 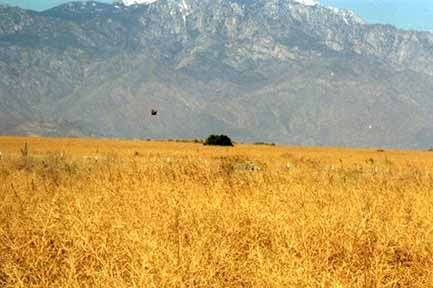 "After picture" The rest of the Coachella Valley NWR in solid mustard, in April, 2005.

The Coachella Valley Multiple Speices Habiatat Conservation Plan (MSHCP) in April, 2005 finished it's draft public comment period--and many of the thousands of acres that are now completely covered with exotic mustard, were being counted on to preserve the 30 or so Endangered Species of this valley. Now what? 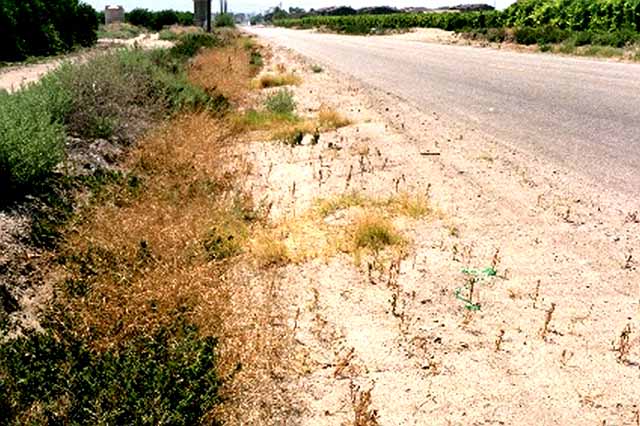 The original Saharan Mustard infestation in North America, the town of Mecca, introduced in the 1920s. Notice how much smaller the plants are from all the other populations that are rapidly spreading throughout California and the Southwest?

Results of a 70 mph windshield survey (or whatever the local speed limits were), of Sahara mustard (Brassica tournefortii): Either not present; is present along roadsides or in medians; or is outside of the roadside to the fence line or has moved from the roadsides to infest adjacent land.

NS = No Sahara mustard was seen along roadside ditches; or if divided highway, also not seen in the roadside median, or in lands adjacent to the road.

PM = Post miles along highways, and numbers indicate the averages found not just at each post mile, but for 1/2 mile on either side of the post mile marker.