The conversion of Mojave and Colorado River
Arid perennial grasslands to desert shrubland.
These series of photo illustrate a hypothesis that within historic times (prior to 1850) over
50% of the Mojave and Colorado deserts were covered with perennial native grasses
which have been removed by grazing and these areas have been converted to desert shrubland.
Text and photographs are Copyright © 1998 by Craig C. Dremann,
The Reveg Edge, Box 609, Redwood City, California 94064.
Phone (650) 325-7333
ALSO>> see Dr. Robert Humphrey's photos of Ariz. and NM arid grasslands, changed to desert

CONVERSION OF A THREEAWN PRAIRIE TO DESERT SHRUBLAND BY GRAZING:

Three-awn prairie west of Anza-Borrego State Park, as the perennial native grasses are removed by grazing, shrubs and cacti move in to fill the vacancies.

CONVERSION OF BIG GALLETA GRASSLAND TO DESERT SHRUBLAND BY GRAZING:
Big Galletta or Hilaria , when exterminated by grazing: cacti, ocatillo, or creosote will move in to fill the vacancies. 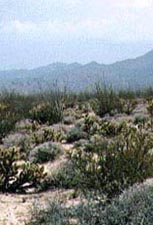 Big Galleta or Hilaria in Anza-Borrego State Park, with cactus and ocatillo moving in to fill the vacancies.

Big Galleta or Hilaria in Anza-Borrego State Park, with creosote moving in to fill the vacancies. 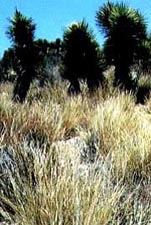 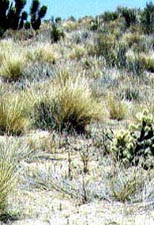 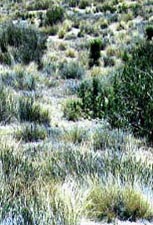 As the Desert Stipa disappears, cacti, creosote and other shrubs move in to occupy vacancies. 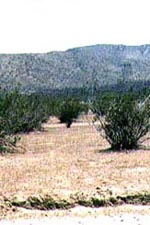 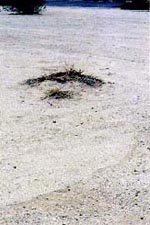 What happens to the creosotes when the perennial grass understory disappears in between
Photo: Anza Borrego State Park.

The perennial grasses are the keystone species of the arid ecosystems of California, Southwest and Great Basin--- areas that we now call "deserts." These grasses held the ecosystem together, produced the bulk of the organic matter which in turn provided the habitat for forb, grass and shrub seedling survival. Without the perennial grass understory, the organic matter and nutrients in the soil oxidize and blow away. Even the long-lived shrubs like creosote will cease reproducing when the soils are too depauperate for their seedlings to survive, and these "elders" will eventually die, leaving only rock and sand.

The Mohveg project is part of a process to efficiently and cheaply direct-seed the perennial native grass understory back into large-scale areas of the arid regions of California, the Southwest, and the Great Basin. More details about our reserach can be seen here and

1.) Mohveg Project, completed map of the 23 milion acres of the Mojave's natural vegetation.