Thank you for your time last month, to discuss the $5 million dollars in damages to the Russian Ridge grassland habitats that were done by the five illegal Calfires conducted from 1996-2009, that Calfire stopped due to "CEQA issues".

I gave you a list of the number of native grassland plants lost to both the fires and the increase in weeds like the Harding grass, wild oats, and Italian thistle.

Based on my vegetation transects that I have been conducting at Russian Ridge since 2003, I estimate that Russian Ridge has lost 428,000 native grass plants and 2.1 million wildflower plants, and the weeds have increased by similar numbers--an additional 2.6 million plants.

I only see one possible scenario obtain the funds to repair the damages at Russian Ridge: $5 million dollars from your insurance fund, for gross negligence, errors and omissions and allowing the public nuisance of the fires and weeds to kill the native grassland resources.

I would like to see the District, by the end of June, to outline a timeline to start the repair of the damages. For example, 30% of the total number of the Harding grass plants infesting the Russian Ridge preserve, eradicated each month, and have July first as the start-date and have total eradication 100 days later, on October eighth, just before the rains start.

Feel free to share this email with anyone, and look forward to hearing from you.

Thanks for your email.

As you can see from the agreements that the District made with Calfire when they conducted each of the five burns, the State agreed to pay for up to $1 million dollars in property damages for each of the five fires.

The alternative, is that the District admits to your insurance company, that the five burns were illegal under CEQA and you need the five million to mitigate the damages, to bring the grasslands and wildflowers of the preserve back to their pre-burn levels, and restore the two million native plants that were lost from gross negligence, errors and omissions, and by allowing a public nuisance to destroy the resource?

Is the District going to start the process this year, of completely eradicating the Harding grass on the preserve, and to start mowing the two million+ new weeds that have been spread by the fires, and removing the exotic plant thatch, to allow the wildflower to regrow this winter?

Feel free to share this email with anyone, and look forward to hearing from you.

I chatted with Teresa Gibson, the Mid-pen. person in charge of donations, and asked if the District could establish a special fund for RUSSIAN RIDGE WILDFLOWERS restoration, so that the $5 million needed to repair the damages from the five illegal fire can have District supporters donate the funds necessary to do the job.

Otherwise, the only alternative I see, is admitting the mistake to your insurance carrier, and get the $5 million that way?

I have attached a picture taken last year of the Italian Thistle patch that takes your breath away, and you probably know about the picture of the Russian Ridge Harding grass tsunami that is shown at http://www.ecoseeds.com/invent.html?

One of the first things that could be done, is to hire someone to fly an ultralight over the grasslands each spring, and photograph the current extent of the remaining wildflowers, and map the locations of the Harding grass, wild oats, Italian thistle and yellow star thistle stands?

Look forward to hearing how the $5 million will be put together, and that progress will start this year on the repairs? 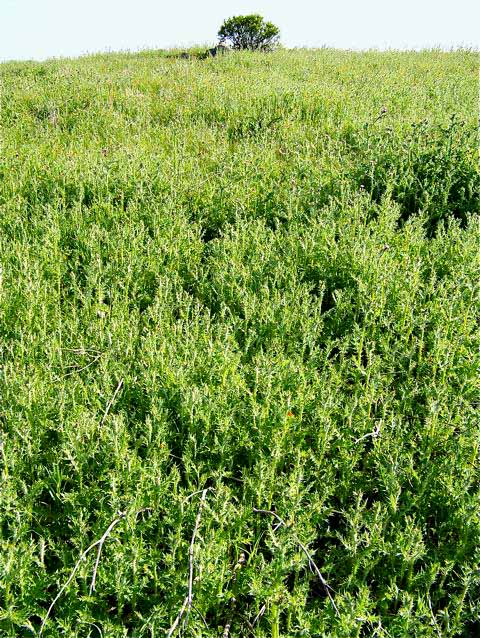 Italia thistle weed at the north end of Russian Ridge, 2011.

I still have not heard anything about the $5 million for the Russian Ridge grasslands and wildflower field fire damage restoration.

Native grasslands and wildflower fields are considered the second rarest of all of our California ecosystem, by the State Dept. of Fish and Game.

Mid-pen. should stop the <Sgt. Schultz method of grasslands management>. That is from the old TV series, Hogan's Heroes, where Sgt. Schultz, the Nazi guard at a WW2 POW camp motto was, "I see nothing, I know nothing."

Mid-pen. is not annually monitoring the thousands of acres of grasslands and wildflower fields, and that is really gross negligent management for that very rare habitat, especially if fires and herbicides are being used as management tools.

In May, at a public meeting, one of your land managers said that she does not agree with the vegetation cover data that I measured at the Mid-pen preserves from 2003 to date. Mid-pen knew I was gathering that vegetation cover data from my web page that I started in 2006 at http://www.ecoseeds.com/invent.html.

When I set up discrete markers for my vegetation cover transect at Russian Ridge, after the 2007 burn, I got my stakes pulled up and a nasty letter from the District. It seems that if the District is not going out each year to do some basic grassland and wildflower field cover monitoring, you are not happy with the idea of the public finding out what is going on either.

When I talked to your land manager a week ago, there was no possibility of anyone from the District going out to each of your Preserves that contain grasslands this year, and doing a 30-minute 100-pace Evans and Love vegetation cover transect, to compare the current conditions with my 2006 data, that the District is questioning.

The District cannot have it three ways--to not annually monitor the grasslands and wildflower fields in the various preserves that it manages, then wants to disagree with data that is collected by the public that indicates problems with the current management, then the District does not want to go out to gather any annual vegetation cover data to confirm what is being measured by the public each year?

That sounds a lot like Sgt. Schultz, "I see nothing, I know nothing"? Or in the case of Mid-pen. grasslands and wildflower fields, the District wants to see nothing and to know nothing, and also does not want to see for themselves, what the public is seeing or knowing.

Should the second rarest ecosystem in our State, deserve more respect, like an annual vegetation cover census?

And if Mid-pen. does not want to do some annual vegetation cover measurements, at keast one of the Mid-pen volunteers could go out and gather that data, so those grasslands and wildflower field management can get back on track, and the resource stop sliding towards extinction each year?

I went out and measured my Russian Ridge transect last month, and the wildflower cover is continuing to slide downhill because of the weeds, and you can see the data at http://www.ecoseeds.com/WMA.html.