1997 Western Roadside 2,325+ Miles of a
Megatransect for Native Grasses and Ecological Conditions

Copyright © 2006, 2007, 2011 by Craig Dremann,
Box 361, Redwood City, CA (650) 325-7333
The 1997 Megatransect data shows a different perspective on the issue of exotic plants in North America, using the conditions of the perennial native grasses as the main indicator. The absence of perennial native grasses in any ecosystem, provides areas for future exotic plant infestations.
The worst case in North America, and perhaps world-wide, is the Central Valley of California's 99+% extinction of the original native perennial grass understory, now infested by hundreds of exotic species. California's weedy conditions only took 150 years or about five generations to get in the current ruined condition. When the native grass understory is missing in other States, those areas will be vulnerable to eventually degrade into the same conditions as California, without active restoration of the original perennial grass understory.
The absence of the original perennial native grass cover, is like a big "vacancy" sign, asking for some exotic plant or weed to fill that vacancy. Some exotic plant or plants will eventually fill those spaces, and do not be surprised when they do so. Or, the process of restoring the original local native grasses could begin.
The intentional sowing of exotics helps exotic plant infestations get established, especially when you see that in most Western states outside of California , the percentage of weed cover is only 1-3% (except 8% in Utah ), compared to the intentionally-sown exotics that are covering 10-38% of the areas surveyed.
The 1:10 ratio between weeds and intentionally-sown exotics is a staggering difference, not known before this Megatransect was done, could become a good reason for land managers to ban the sowing of any exotic seeds along State highways, on Federal lands, or in wildlands.
The original native grass cover percentage in non-riparian areas, could be used as a measure of resistance to future exotic infestations, with +100 being the most resistant, and minus 200 is an ecological vacuum for new exotics to colonize:
1 to 100 percent original perennial native grass cover = +1 to +100 on the scale.
No original native grasses, nor any exotics present yet = minus 100
No original native grasses, but exotics planted or colonizing = minus 200.

When ecosystems drop below about 10% native grass understory cover, they can slowly collapse, because the whole structure of the ecosystem's understory has been so severely weakened, any new exotic can push over the remaining native ecosystem. You can see photos of this happening to public lands in California at http://www.ecoseeds.com/invent.html
I am predicting that protecting Endangered native plant species that are surrounded by exotic plants, like in many parts of the arid West, will become an extremely difficult task---unless hundreds of millions of dollars are invested in inventing ways to rebuild the native ecosystem, so that the exotics cannot start the collapse of what is left.
This 2,325 miles of megatransect data is available for use by Federal, State or local resource management agencies, or by environmental groups, under a license agreement.
The data covers what species of grasses were growing in 1997 at every mile-post marker, including exotics like cheatgrass or intentionally-sown grasses like smooth brome or crested wheatgrass. Miles covered for each State: California: 110, Colorado: 483, Idaho: 284, Nevada: 400, South Dakota: 77, Utah: 273, Wyoming: 670, and in Yellowstone National Park: the easternmost 28 miles. 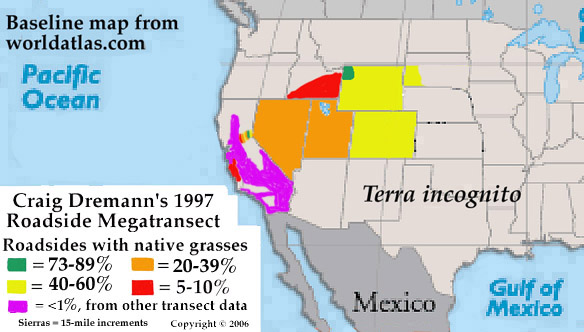 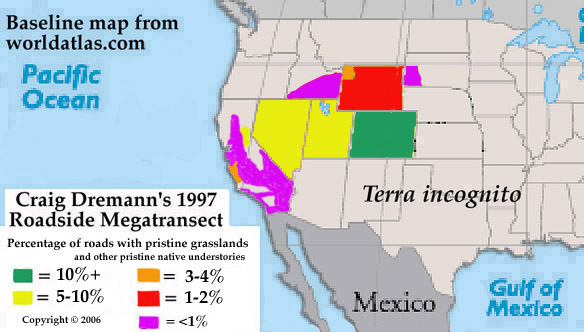 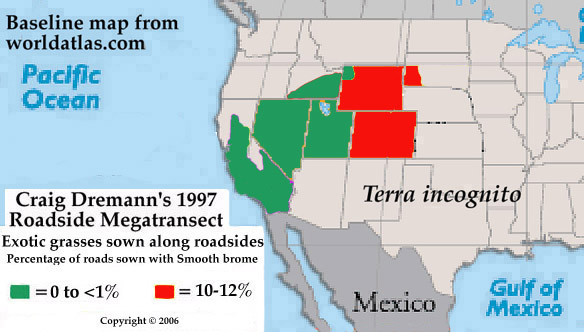 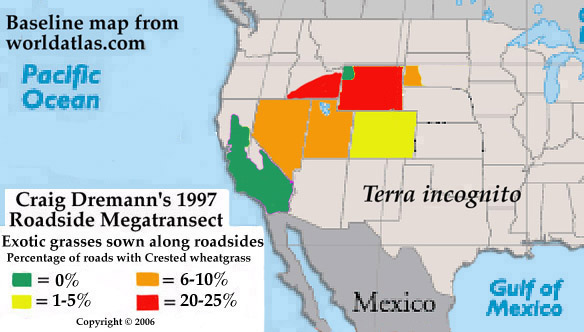 Details of the mile-by-mile 1997 Megatransect, showing the 68 miles of US highway 93 in Nevada, from Jackpot to Well. At the time of the survey, four miles south of the H-D Summit or 18 miles north of the town of Wells, was a pristine Great Basin Wild Rye prairie.