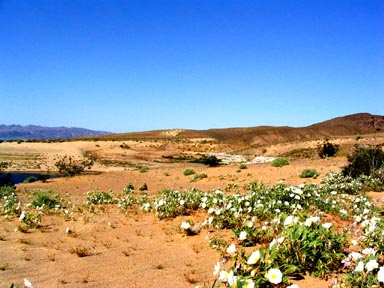 How the dunes should look at Lake Mead 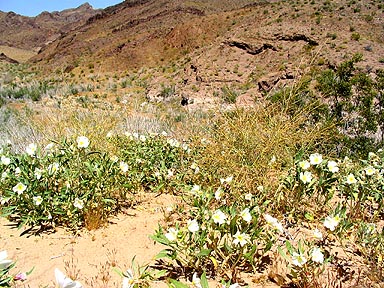 When the dunes start to get Sahara Mustard 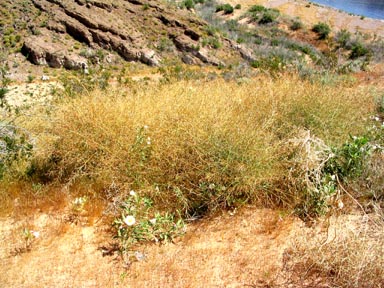 When the Sahara mustard is solid

[Sisymbrium] S. irio- was very much more common at Lake Mead NRA this year than we have ever seen it before. It appears to be along roadsides, where water has pooled, but was in dense stands in those areas.

We did not like what we saw this year with this plant. We also did not like seeing so much African Malcolmia-another mustard- that was everywhere- particularly on gypsum, this year. It is very possible that while our attention is focused on Sahara mustard, we will find out that Sisymbrium or another species has moved in. We can't put blinders on - we need to be aware that all these alien species are potential threats.

There is no need to nit pick details on Sahara mustard- we have a disaster on our hands that a great deal of manpower will be needed- just to keep at bay.

Plants disperse by several mechanisms- large plants act as tumbleweeds and roll across the landscape shedding seeds that pop forcefully out of the pods.

Plants can float in water for a long timeand still have viable seeds on them- we tested seed that had been under water in Lake Mead for up to 11 weeks and they still germinated.

Rodents cache the seed and move seed into open desert, and frequently to caches under shrubs where their burrows are, at some distance from original infestation, almost immediately.
These seeds are oil rich and tasty and my guess is that they are a favorite of all seed eating animals.

Seeds have a mucilaginous coat then swells up and adheres to almost anything within a few seconds of being in contact with water. I suspect that plants are moved by vehicles, earth moving equipment, people, animals, wind, and water.

Plants can roll down roads, float across lakes, be cached and recached by animals that move the seeds up to 100 meters from the last cache. Cached seeds can germinate and go to fruit just fine-even in dense competition with other seedlings in the same cache.

When populations saturate all the rodents in neighborhood, plants spread out into the open desert. We have observed this at Lake Mead NRA. We found Sahara mustard along the road, and particularly at corners, on Christmas Tree Pass in the Newberry Mountains.

We were particularly puzzled by how disjunct the populations were. After talking with Maintenance people, we found out that road repairs were made with fill from a highly infested area and road grading probably explained the spread along the road and particularly at corners, where soil tends to be piled up. Soft soil piles are good places for rodent caches, as well.

We were able to stop the infestation from further spread by pulling out all the plants along the roadsides and from infected places before they went to fruit, but we have had to do this religiously and thoroughly for 2 years in a row, so far. This means that there is a seed bank of unknown longevity that may haunt us for years to come.

I think Sahara mustard has a preference for sand and gravels- but we have found it on heavy gypsum- and in very salty soils, like under established saltcedar stands- It is mistake to think this plant only is a menace for sandy soils. - It goes to sand first- but it goes everywhere else, as well. Seeds can germinate in water laced with high concentrations of salt.

On Sandy Cove, a dune system here at Lake Mead NRA that is home to the largest known population of a rare plant, we have been removing plants with ever increasing intensity for 5 years now. When the water was high in 2000, there were very few Sahara mustard plants on the dunes. When the water went down we started seeing infestations in the drawdown zone.

These infestations have now gotten so huge, we can't deal with them all. Plants get huge along the shoreline where there is ample water and these huge ball-like plants, break off and the plants blow up onto the dunes. A great deal of the shoreline is now infested and plants have moved up out of the drawdown zone into open desert. We can't stop it.

On the east side of the dunes, I found NO Sahara mustard plants in 2001, in 2003, I pulled
out less than 50 plants from the dunes while I was doing my rare plant survey. In 2004, we pulled out over 3,000 plants from that same area. This year we pulled out over 10 times that from the same area, and had to leave large sections that were too steep for us to get down on to pull out the plants. I think this plants can and does explode, maybe we don't know exactly
how, but it does it.

Seed production is huge, viability is very high, and there may not be as much predation as we would like. The rate of growth may be uneven and extremely large in certain years- also the seedbank itself works against us.

We also are doing roadside surveys for invasive species of plants, including Sahara mustard- it costs a lot to do these surveys-the labor, data management, vehicles, etc. However, I feel that if we waste valuable time that this plant does not afford us, by studying how bad it is- we may miss the window we need to actually do something about it before it is so widespread, there is nothing we can do- but wring our hands because now we know how bad it is.

We have sites on Lake Mead that we have been clearing of Sahara mustard for the last few years, that were so covered with plants this year, and our manpower priorities so critical, and time so short, that we could not do anything this year. We had to watch helplessly while these areas get reinfested with another huge seed crop that will haunt us for the next- who know- 6 years?? And spread even further into the desert and up washes- making control ever more impossible.

It is time to act, not study this menace- in my opinion- or say goodbye
to our favorite desert places as we have known them. It is definitely easier and more fun to create experiments rather than start pulling plants- but pull we better start doing- soon- or we can forget finding an answer otherwise, in my opinion.

When areas get completely overwhelmed, we will need to basically nuke the whole area with herbicide and start over-because Sahara mustard it is not going away- it is spreading rapidly and populations are becoming denser and more pernicious every year- that is what I am seeing here at Lake Mead, in any case.

There are miles upon miles of Sahara mustard infestations on Mormon Mesa, in Logandale, and along the highway to Mesquite, my surveyors tell me- you don't have to go to California to find huge overwhelming fields of this stuff.

There are collections of Brassica tournefortii from Lake Mead in the 1970's, we just recently figured out we had a problem when plants showed up on Sandy Cove and in other places around the park that are particularly sensitive habitats.

These pictures were taken on Sandy Cove.

I think the Clark County MSHCP is in trouble for keeping a permit for Astragalus geyeri- because they cannot claim they have this plant is "covered" - that is able to continue developing without that plant becoming endangered- by any stretch of the imagination.

Astragalus geyeri is a very rare sand- loving annual- the habitat for which has been swamped by Sahara mustard this year. My guess is that a study will ensue that will tie up resources and
people for several years while they try to figure out how much of a threat Sahara mustard really is. If the weather turns dry for the next few years- then it shows there wasn't much of a problem.

COST of REMOVAL of SAHARA MUSTARD

I calculated what it approximately cost us in labor only to remove the 270,000 plants from the 157 acres [1,720/acre] of Sandy Cove that we did this year at Lake Mead NRA.

I calculated $197 per acre [11 cents per plant]. I calculated this by adding up all the man hours spent this year on Sandy Cove only and dividing by the number of acres of the dune site and multiplying that number by the average salary of the crew by averaging the per hour cost to Lake Mead NRA for highest to lowest paid.

I did not attempt to figure out what it cost for use of the boat and cost of equipment, bags, etc. Therefore, this is a conservative estimate of the true cost to remove Sahara Mustard from this
one dune system.