An internet search of the term"War on Weeds' will result in over 700 web pages with that catchy title.

The former U.S. Senator, Larry Craig (R-ID) had a "War on Weeds" web page, where he wrote: "A long time ago my dad told me that there are two ranch wars I will never win: the war on bugs and the war on weeds."

Senator Craig also said: "These weeds infest an estimated 70 million acres of federal lands in the Western United States that is, the size of Rhode Island, Delaware, Connecticut, New Hampshire, Vermont, Massachusetts, Maine, West Virginia and South Carolina put together and every day that goes by, noxious weeds will infest another 4,600 acres"

The title "War on Weeds" is not scientifically sound, and this approach will never produce any successful processes, regarding the issue of management or control of exotic plants. The term "war", according to Webster's, is "A state of hostility, conflict, or antagonism."

As scientists, we need to start admitting the fact and discussing with society in general: That all the scientists are aware that no amount or degree of hostility, conflict, antagonism, or warfare against the weeds, will ever help us achieve control and management of the exotic plants in North America.

Since many of the weed seeds are viable in the soil for long periods of time, from decades to hundreds of years, the North American continent is now permanently inoculated with the seeds of destruction to our indigenous ecosystems.

Furthermore, we are intentionally sowing millions of pounds of exotic plant seeds on millions of acres of our public lands each year, to make artificial exotic-plant pastures for private cattle grazing allotments.

Even if we were able to hit the soil containing exotic plants, point-blank with nuclear weapons, we would not kill all the weeds seeds in the soil, as evidenced that plants have regrown around "Ground Zero" of the Trinity atomic bomb test site in central New Mexico. 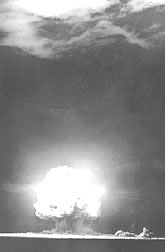 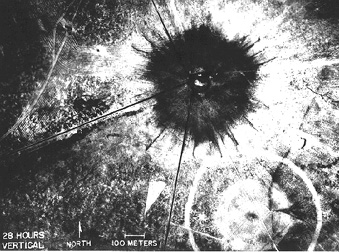 The "Trinity" bomb, 15 seconds after detonation, and about a day later an aerial view of the resulting 400 meter diameter (about 1/4 mile) blast zone. The heat of the blast was so great that it fused the desert sand into a new man-made radioactive glass-like mineral called "Trinitite". Photos from the White Sand Missile Range Public Affairs office and the color photo above is only color photo taken. 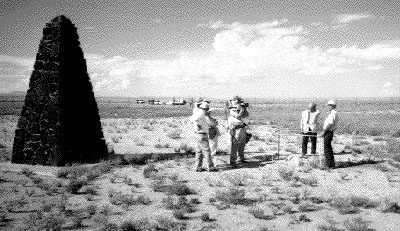 An additional problem of "genocide" arises when you make war on organisms, and your purpose is extermination---see Webster's again.

Why start on the path of war, conflict, hostility, antagonism and genocide, when we as scientists all know, we do not stand a chance to win such a war? Instead, why not negotiate a truce with the weeds?

What I'm proposing is: Why don't we use science to convert the exotic plant infested areas, back to local native ecosystems?

Instead of a "War", we should start a Conversion Process. Why don't we, without hostility, conflict, antagonism, or with genocide in mind, instead encourage the exotics to give up ground permanently, to allow the local native ecosystems to have a place in the landscape also?

Conducting a Conversion Process back to the original local native ecosystem, is really the only way to deal with the exotics. You have to respect the fact that their seeds have title to the soil for at least the next 100 years, and no amount of force is going to make them give up their title. So you have to find a scientific way to negotiate with them, so that their viable seeds will remain in the soil but never sprout---meanwhile, above-ground, the native ecosystems can come back and continue to exist.

The Conversion Process could produce GLORIOUS results, and we have some example of that potential on our web site at https://www.ecoseeds/com/wild.html.

THE WAR IS OVER!!
and the CONVERSION back to NATIVE ECOSYSTEMS BEGINS!

I predict that within 10 years, the "War on Weeds" will be largely forgotten, and what will take its place, is the restoration of local native ecosystems. An example of this change that is appearing already, is the logo of the California State University, Watershed Institute, "Return of the Native" Restoration Educational Project.

How can this Conversion process get started?:

1.) PRESERVE AS MANY EXAMPLE OF NATURAL ECOSYSTEMS THAT ARE LEFT. Floridians, for example, believe that in 30 years, there will be no more land to buy--the entire State of Florida will either be preserved, or developed. So they have a program called "Florida Forever" and they are spending over $100 million dollars annually to purchase land, and 1.25 million acres have already been preserved. This level of spending is probably greater than all the other 49 States combined.

2.) INCREASE BUDGETS FOR EXOTIC CONTROL ON PUBLIC LANDS.
Did you know that, with the exception of the U.S. Military, all the other Federal land management agencies (National Wildlife Refuges, National Parks Service, U.S. Forest Service, Bureau of Land Management, Bureau of Indian Affairs) only get 3 cents per acre per year to manage exotic plants on their lands? What can you accomplish with only 3 cents per acre?---that will not even cover the cost of mapping the weed stands with remote sensing, let alone doing any management!

The U.S. military receives up to $50 per acre annually to manage exotic on the bases, over 100 times what any of the other Federal land managers receive from Congress.

A County park, like Edgewood Preserve in San Mateo County, California, only spends 69 cents per acre annually. However, a Stanford researcher concluded a study last year, and determined that it would actually cost at least $1,000 per acre per year to manage the exotics in that park.

Caltrans, the California Department of Transportation, spends $150-300 per acre annually to manage exotic plants along the State's roadsides. Another example of a State agency budget, is Florida spending about $29 million to manage exotics on State lands, or about $3 per acre.

3.) MANAGE A CERTAIN PERCENTAGE OF THE EXOTIC INFESTATION EACH YEAR. Earlier this year, I proposed that in California's public lands, that we convert 3% of all the exotic infestations back to native ecosystems annually. At the time, I didn't realize that the State of Florida already has such a program underway.

Florida has 8.5 million acres of conservation public lands, and it is estimated that 15% of the upland areas are infested with exotic plants. The Florida program is to convert 25% of these infested lands back to local native ecosystems by 2010, or about 3% per year. And in Florida, you can't just remove one exotic and allow another exotic to move in, or plant another exotic in its place, like is done in California and the Great Basin, Rockies, etc.

4.) QUIT SOWING EXOTICS with one hand, while PULLING WEEDS with the other hand. The Bureau of Land Management, USDA, Agricultural Research Service and the Natural Resources Conservation Service are all supposedly concerned about exotic plants on public lands.

The paradox is that every year, these agencies spend tens of millions of taxpayers dollars on developing, releasing, and purchasing exotic seeds, to sow back onto public lands---millions of pounds of exotic plant seeds. The purpose is mainly to create exotic grasslands for the private grazing allotments, mainly in the Great Basin.

Nearly all of the 50 State Highway Departments, with the exception of Iowa, are still sowing exotic invasive species along most of the Country's roadsides. You can read information about the intentionally-sown exotics on public lands at https://www.ecoseeds.com/weedmaps.html

As a society, in order to have a consistent program regarding exotic plants, we need to immediate stop the purchase of any exotic seeds to be sown on public lands, and along State Highways.

You can find more ideas about managing exotics at https://www.ecoseeds.com/talk.html