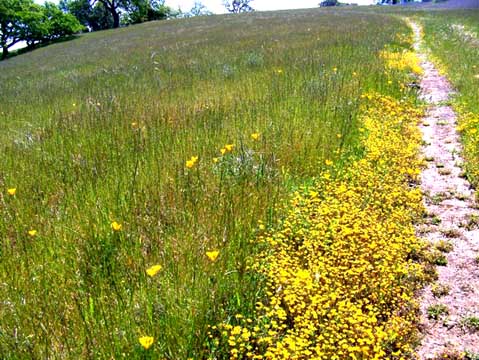 Jasper ridge April 2012, non-serpentine wildflowers along path, surrounded by exotic European grasses. The wildflowers along the trail edge, are indicating that there are still dormant native seeds still in the surrounding hillsides, and those wildflower seeds can be helped to grow by managing the exotic grasses that are currently suppressing them. 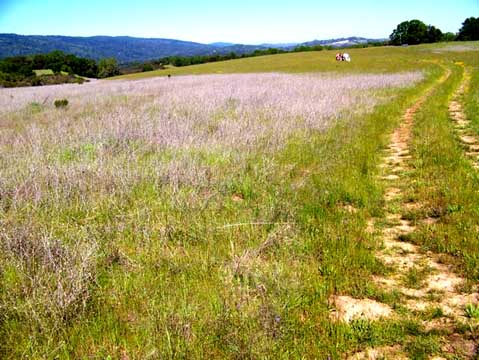 Jasper Ridge, April 2012, solid exotic grasses and dried yellow star thistle stems that remain from summer 2011. This is the location where the Endangered Bay Checkerspot butterfly (Euphydryas editha bayensis) was allow to go extinct in 1998, and climate change has been blamed.

However, it is more likely that is was the lack of management of the exotic weeds that swamped out the butterfly native food and nectar plants, was the ultimate cause of the extinction.

This is a perfect example of the lack of management of exotic weeds and the lack of ecological restoration of native ecosystems, resulting in the extinction of a species that needs a minimum amount of high quality native habitat, in order to survive.

Subject: Resurrection of 100+ acres of wildflowers at Jasper Ridge?

Bob Dodge gave me your email addresses. We went out last weekend, and
your non-serpentine grasslands have the best potential for wildflower
field restoration of anywhere I have seen so far on the peninsula.

I am hoping that Stanford and Jasper Ridge will want to quickly and easily
restore at least 100 acres of the non-serpentine grasslands, like the
portions of the ridge where I took the two photos that I posted at
http://www.ecoseeds.com/WMA.html, where the star thistle is thick and
where the wildflowers still grow along the path.

You want to get rid of those annual grass weeds now, while there are still
some dormant native seeds in the soil underneath the weeds, to sprout up
and grow once you have knocked back the weed seed production. That is how
Michael Shaw did his 74 acres, and how Mark Vande Pol did his 14 acres,
just by mowing the immature weed seedheads and removing them while the
seeds were still green. Underneath the weeds on both properties were
dormant native seeds, just waiting to sprout up and grow.

But you cannot wait too long, because those dormant native seeds have a
viability limit, and if you do not get started mowing and removing the
immature weed seeds soon enough, the natives lose their viability over a
period of time.

Feel free to share this email with anyone, and I hope in the near future,
that each visitor is given a few dozen plastic bags and some gloves, and
start pulling up those immature weed grass seedheads before they mature in
spring, and start from the edge of the paths where the wildflowers are
already growing. Then put the pulled grasses and take them over to the
yellow star thistle (YST) areas, and press them on top of the yellow star
thistle seedlings to shade and suppress them.

Or you could do the same thing with a mower-tractor, and make sure to
gather up all of the cut material, and use it to cover the yellow star
thistle seedlings. Or string trimmers, or hand-grass cutting equipment.
NEVER mow and leave the cut material in place, because the cut material
contains natural herbicides called allelochemicals that can interfere with
the native seedling germination the following winter.

If Stanford already has a contractor mowing the weeds in other parts of
the campus, all that needs to be done is to mow the non-serpentine non-YST
areas, and gather the cut material and put in on top of the YST seedlings
about an inch thick while the seedlings are small. DO NOT cut or mow the
YST, but kill its seedling with a mulch of the cut weed grasses.

If you can sow some Nassella pulchra seed in late summer into the cut
thatch that is laid on the YST, broadcast seeding at about 100 pounds to
the acre, you can buy some local seed grown by Hedgerow Farms, of the
Arastradero ecotype. By putting the cut thatch on top of the YST
seedlings and then sowing in the local Nassella ecotype, you should be
able to convert that massive YST area back to Nassella within one year or
less.

If anyone tries these wildflower/native grass resurrection methods or YST
conversion method as experiments, and any journal article will be written
about them, I want to be a co-author on the article(s).

Dear Philippe and All,

Thank you for your email, and for the offer to tour the JR Global Change
Experiment. What I am suggesting, could fit perfectly with the research
that you described that is being done at the Jasper Ridge Preserve right
now.

By following my recommendations, your researchers can jump ahead about two
to three decades by repeating the experiments that did within a mile of
Jasper Ridge Preserve thirty years ago to answer exactly the same
questions that you are studying today.

For example, you are looking at YST, and in 1987 I obtained a Caltrans
permit to study YST growing along Sand Hill Road at I-280 and found that
by mulching the seedlings in spring with the cut European grass stems, you
could permanently get rid of that weed.

Then in 1988 I tested that YST permanent eradication method using mulch on
a property in Portola Valley right next to the Preserve, and it worked
within 30 days or less.

So by mowing the weed grasses while the seeds are immature, and gathering
up the cut European weed grass stems, like this weed or earlier in spring,
and using those stems as mulch on top of the YST seedlings right now,
while the YST seedlings are still small, should permanently get rid of
YST, Preserve-wide. And you never, ever mow, burn, or graze the YST
itself.

And I would cut and gather the European weed grass stems on either side of
the path where the wildflowers are still growing right at the edge of the
path. That way, you can accomplish two restoration processes at the same
time---get mulch for the YST areas, and clear the weeds, so the
wildflowers can occupy more space near the path next spring, if the weeds
are cut before the seeds matured.

I know that for all of the research that is done on the Preserve, may
result in a peer reviewed article written in a journal somewhere. That is
exactly why when I emailed my recommendation, of a simple method to 100%
permanently eradicate the YST over the entire Preserve, that if any
article or articles are written testing my method, I requested that I be
added as a co-author.

So after the YST is eradicated with the European grass stalk mulch over
the whole Preserve, then the real work of finding the kinds of native
plant mixes most likely to resist further invasion.

More important than the mixes themselves, is how to get the native plant
mix established cheaply, quickly and to as close to 100% cover, like 99.5%
native cover in 180 days or less.

You can see where researchers from UC Davis have been trying to do that
process on two acres in the Sacramento valley, to convert the YST and the
weeds to local native cover along the roadsides, and after a decade and
costing $245,000 per acre, are still at 60% weed cover.

What you are saying about finding the native mix best resists weed
invasions, and equally important is how to get that mix established
quickly and as close as 100% cover, are the very questions that I finally
resolved after forty years of study.

And I am currently doing a 2012 vegetation census of our grasslands that
you can see at http://www.ecoseeds.com/WMA.html.

I am hoping that you will try my YST eradication method this spring on the
Preserve, either on a very small scale like a couple of square meters, or
a larger scale like 2-10 acres, and I believe you will fall in love this
method as much as I have.

My method allows you to erase the YST from the ecological picture, so you
can concentrate on the more important weeds, like the Soft Chess,
foxtails, wild oats, ripgut grass and the rest. 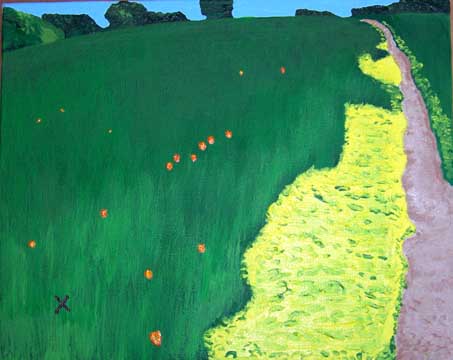 Title: "MURDER AT JASPER RIDGE and BUTTERFLY X, the X marks the spot where "Ishi" the last Bay Checkerspot in the area died in 1998--perhaps Stanford University forgot to manage the exotic grass weeds and thistles that were taking over the butterfly native nectar and food plants needed by the butterflies for their survival, and those important plants were pushed to the edge of the path that you can see in the picture, with a few scattered poppies still surviving in the tsunami of European grass weeds that were green in April 2012 as shown here--fortunately these few remaining flowers indicate that dormant and viable wildflower seeds may still survive in the soil underneath the exotics, so if the exotics were properly managed each year, there is a good possibility of, at the least, the wildflower's and the native bunchgrass plant's return.