98% of NM grass species predicted to go extinct within 100 years.

Mass extinction is in progress in 2012, and needs human
help to turn things around.

Photos and text Copyright © 2012 by Craig Dremann,
The Reveg edge, Box 361, Redwood City, CA 94064 (650) 325-7333
Anyone is free to go out and investigate and confirm the facts of these issues, and I would love to hear about the results of any of your experiments. However, if anyone obtains a grant to study any of these issues, please notify me when applying for the grant and I want to be included as a co-author on your published paper(s).
Photos of NM grasslands and measurements made October 2012.

FUTURE EXTINCTION--Here is the issue about the future extinction of NM grasslands.

If you asked anyone in 1814 if they thought the Passenger pigeon could potentially go extinct, they would have laughed at the idea--especially when an estimated five billion birds were flying in flocks numbering in the tens of millions across the USA. But the last passenger pigeon, Martha, died in 1914.

What I am suggesting, is that the native grass species that remain in 2012 across the State of New Mexico, 98% of those species will be extinct within 100 years or less. This mass extinction is playing out today, and can only be reversed by human involvement. 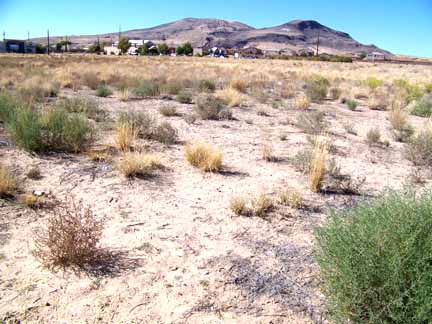 LOS LUNAS GRASSLAND-- Los Lunas west of the junction of I-25 and Highway 6, and across the street from the Chilis restaurant, you have a lot of grass diversity but extremely low percentages of cover--such as only 3% Tobosa, 7% Indian Ricegrass, 3% Grama, 2% Stipa comata, and 85% bare soil.

I am using the Evans and Love toe-point transect method from their 1957 article, where you note what plant your toe touches at each step, and you do at least 100 paces in a straight line.

At the Chilis site, there are also a smattering of other species, like Sand Dropseed, Three-awn, another Stipa, and a few scattered yuccas. Once again, you see only old plants, no young plants or seedlings, and a whole lot of bare soil. 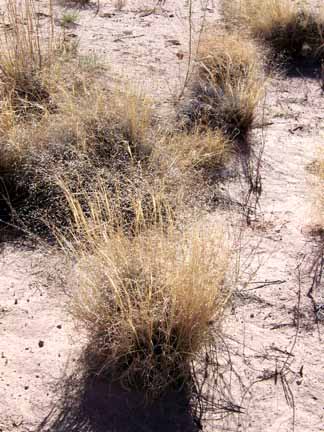 Native grass old plants, with no seedlings or young plants. Lots of bare soil where soil nutrients and organic matter are in levels too low for seedling survival. Also no soil surface crusts, like mosses or algae.

AGE-PYRAMID STUDY--If you use an Age-pyramid study on each species of grass in any of the NM grasslands, State-wide you may come up with an upside-down pyramid, with a lot of old plants and very few or no young ones.

WHY NOT REPRODUCING?--The only species of NM native grasses that seems to be able to keep reproducing, is the Indian Ricegrass and perhaps the Stipa comata. All others plants are elders, still producing viable seeds, but unable to reproduce. So the question is--why are the grasses not reproducing, and why are they not covering those bare areas.

And what about the missing wildflower species, that should also be filling in those empty bare soil areas?

The reason the grasses are not reproducing or producing seedlings, is that the bare soil area nutrients have been grazed away and carried away by the sheep and cattle to the extent that the soil nutrient and organic matter content is now below the threshold levels necessary for native seedling survival.

SOIL NUTRIENT TEST--You can do an experiment like we did 19 years ago in the Great Basin. Take that bare soil and put it in two boxes, like you can see at http://www.ecoseeds.com/good.example.html, or you could use two plastic pots, or any other plant container.

Get some local native grass seed (other than Indian Rice grass or Stipa comata), like some grama that germinates quickly. Actually test that seed for germination on moist cotton, like 20 seeds, and note how long it takes to germinate, and how many of the 20 seeds actually sprouted.

Then plant those seeds in the two boxes or pots. In one pot or box, do not add anything, and in the other, add some sawdust for organic matter and some fertilizers. Water both at the same amount, each day. I personally like organic fertilizers--like bone meal, blood meal and sulfate of potash, plus some iron supplement and micro-nutrients like copper and manganese when needed.

And sometime you really have to pour the nutrient and organic matter on, especially when the cattle and sheep have been too greedy for too many decades.

That is what you see on my website. In the untreated box, the seeds were viable and sprouted and grew, and then ran out of nutrients and died at 2" tall. In the second box, nutrients and organic matter were added above the thresholds needed by the seedlings, they grew and thrived. 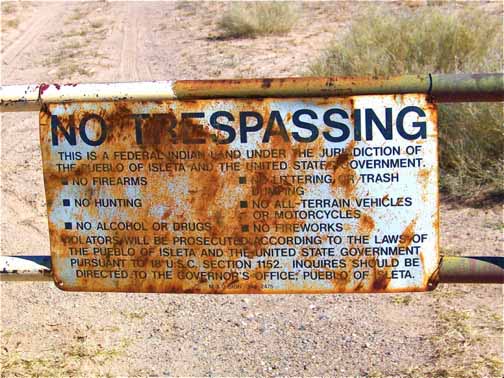 Isleta Pueblo at cattle gate along Highway 47 about PM 39. 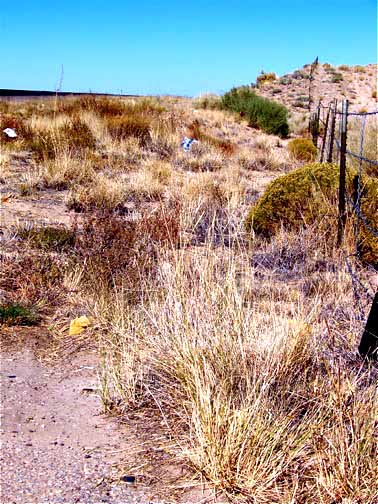 ISLETA PUEBLO GRASSLANDS--Highway 47 at about PM 39. On the highway side of the fence at Isleta Pueblo, there is a relict stands of tobosa, grama, and Indian Ricegrass.

What is interesting-looking about that stand, is the lack of any native grass seedlings and lots of bare soil between plants, and the lack of other species of herbaceous perennials of any of the normal grassland plant families that should be occupying those bare soil areas.

It was like looking at a cemetery, and the bare soil is where the grasses died and were buried, and the scattered living old plants are the tombstones for that site, marking where a solid native grassland once existed. Or another way of looking at it, is that the remaining scattered plants are the only pieces left standing of an ancient ruin of an ecosystem. 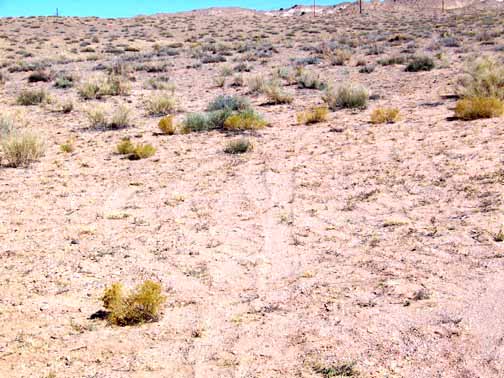 Isleta Pueblo, native grasses are obeying the no trespassing sign, and are absent from the land. This is the worst case for New Mexico grasslands, which was zero native grasses immediately across the fence from Highway 47 at about PM 39. 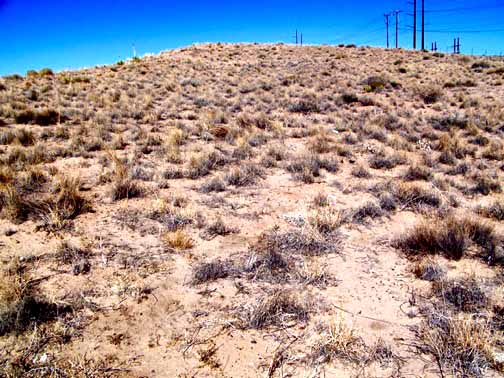 Behind Hard Rock casino, nice stand of grama, how the land should look just a mile south, for the land behind the no trespassing sign.

Behind the Casino is a monoculture of grama, about 33% grass cover with a lot of bare soil. However, looking from that spot to the south towards the highway, in the recently disturbed soil you can see a swath of new Indian Ricegrass plants recolonizing that area.

SOIL NUTRIENT THRESHOLDS--You are going to find that each species of native grass in New Mexico has its own soil nutrient threshold for organic matter and N-P-K. It is one of the most unusual ecological paradoxes to see old plants grass growing on a site, and you test and find that the soil a foot away is too poor for seeds harvested those plants, to grow and survive.

Then, once you correct the organic matter and soil nutrient problems, you can see the result, such as a solid grassland to the horizon at http://www.ecoseeds.com/greatbasin.html.

So the prognosis of all of the grassland in NM in the next 100 years, is 98% extinction of all of the species that are not reproducing today, and they will not start reproducing until the bare soil issue is corrected, so that the old plants can start to produce seedlings to take their place when they die.

There ultimately should be less that 5% total bare soil exposed in NM grasslands, and mainly where prairie dogs disturb the soil like at the relict stand of those animals at Bosque Farms along the highway there. You can see those very low levels of bare soil in SW grasslands in Dr. Humphrey's 1890s photos at http://www.ecoseeds.com/desertgrass.html.

Somebody should really buy that property in Bosque Farms and preserve that centuries-old prairie dog town, and replant the native food-plants they need to live there.

So to conclude--unless the people of NM start immediately to repair the damages to their native non-riparian grasslands--mainly putting back the soil nutrients and organic matter that were stolen by the cattle and sheep--then within the next 100 years, 98% of your grass species will be extinct.

STOP GRAZING, UNTIL SOIL NUTRIENTS CORRECTED--And all grasslands in NM, especially the Federally managed lands, grazing will need to immediately cease, and remain ungrazed until the soil nutrients and organic matter are added to raise the levels back up to those thresholds needed by native grass seedling survival, and no grazing until monitoring begins to measure a reverse in the age-pyramid of all grass species in the area.

COULD NM GRASSLANDS possibly be more valuable as carbon credits to offset the Chinese, East Indian, Japanese and European CO2 production, than used for local sheep and cattle food?