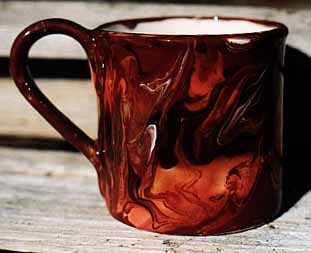 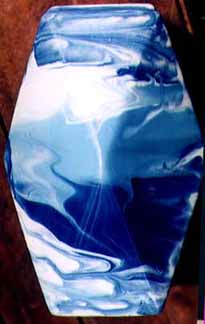 Craig's special trademark "swirly-glaze" ceramic art is done on molded white bisqueware, producing striking pieces, similar in appearance to the "swirl-painting" that the designer Louis Ipsen of the Bauer Pottery Company made in the 1940's.

Craig was born in Boise, Idaho on March 3, 1954, and his family moved to California and settled in San Francisco in 1956 on Lombard Street, and then in 1958 moved 25 miles south to Redwood City. At the age of eight he began working in ceramics at Peninsula School, a private school in Menlo Park, under the guidance of his instructor, Mrs. Billie Shaw.

Experimentation with the swirly process began in 1996, and on October 10, 1996 the technique was discovered that potters had attempted for centuries. Swirly glazing attempts has a long history, beginning with ancient Egyptian potters over 6,000 years ago, when they tried to duplicate the swirly patterns of minerals.

Mesopotamian potters a thousand years ago experimented with swirly designs on large dishes, and an example can be seen at the Ashmolean Museum in Oxford, England. A few pieces of Chinese Chün ware of the Sung dynasty, about 700 years ago, have swirl-like designs. Crude "swirls" were made on teapots by Josiah Wedgwood about 1757; and F. & R. Pratt of Fenton, England painted plates in the 1850's to simulate the swirls of the green mineral malachite.

Pottery and ceramics, from a cultural standpoint, have the highest historic value for a culture. When all the monuments to a society, all the writing, all the music is forgotten, all the baskets and textiles decay, and all the books and papyri have turned to dust: pottery and ceramics remain as a testament to what a culture valued and who they were.

Ceramic art is probably the longest lasting form of art, that will literally last through the ages, even it is just shards in a midden. I have chosen the medium of ceramic to permanently record some ideas, because it is one of the few artistic artifacts that will last for 10,000 years or more. Even as shards, archaeologists can study these designs and know that they were made by distinctive individuals or a distinctive culture.

Swirlé ceramic art = flowing designs which represent something from nature or the natural or human environment, and designs which have meaning to a group of people.

Natureware = depicts exact species of plants which have meaning to an individual, like plants from around their home or surrounding natural environment, to remind the person of home when they are away; or to show others what is important to the individual about their surrounding environment. For a person in the Mojave desert, it may be a creosote bush or a Painted lady butterfly; in Florida, it may be a Saw Palmetto plant.

Sacred ceramics = Ceramic designs which depict a startling truth. It is usually a dream or vision that is taught to the humans or inspired from the natural world.