Copyright © 2001. 2013 by Craig Dremann, The Reveg Edge, Box 609, Redwood City, CA 94064 (650) 325-7333 - All right reserved. Links may be made to this page, but no transmittal of this information either in a written or electronic form shall be made, nor any of this information put on any other web site(s) without written permission from the author plus the payment of a license fee.

The Reveg Edge Ecological Restoration Technologies purpose is to develop and license innovative ecological restoration technologies; and to educate and consult with agencies and individuals who have a desire in achieving success every time when planting native plants.

Most people might consider that instructions or information on how to successfully grow native plants should be free, provided by the seed companies along with the seeds or printed on the back of the seed packets. But until our firm started developing direct-seeding native restoration licensed technology, all the information on planting California native plant seeds was only useful for growing them in an irrigated garden.

This web site is an example of the technology we have developed. You will not see this information suggested by any other restoration group, seed companies, consultants, or anyone else involved with ecological restoration or planting native plants. That's what sets our company apart----we have developed technologies that work the first time, every time. Our technologies may seem controversial at first, until you try them and you begin to have success every time.

Ecological restoration or even planting a small stand of wildflowers in California is a big challenge due to the introduced exotic species, which now cover 99.999% of the State. When planting roadside wildflowers, for example, you must follow each and every step outlined below exactly, or your planting will have an excellent chance of failure within three months.

RULE 1 - If you are planting on public land including highway roadsides, make sure your project has all the proper environmental reports completed prior to starting. For example, there may be a listed Threatened or Endangered plant in the area, or Sensitive species like wildflowers or bunchgrasses and your clearing, herbiciding or seeding could extinguish the population. Make sure your project will have no negative environmental consequences or impacts.

RULE 3 - If your project is near or within a National Park, US National Forest, or Bureau of Land Management area, genetic material from the site may be required by the agency, and you will probably not find that material commercially available from a seed company. You will need to get a seed collecting permit from the agency who manages the land, and hire a professional seed collector to harvest seed for you at least six month in advance of your project.

RULE 4 - Only plant seeds or plants which are native to California. Those are the species shown in bold-faced type in the Jepson Manual: Higher Plants of California, edited by James C. Hickman, published by the University of California Press.

RULE 5 - Only plant California native seeds or plants within Counties where those species have know to have originally occurred, and at the same elevation. Caltrans helped fund a wonderful database of all the plants of California at http://www.calflora.org, where you can type in the species name and a map is created to show where it occurred. Then you can view the data by County, to see at what elevation the species has been found within that county.

RULE 6 - Ask for "Yellow Tag Certified Seed" This is seed whose origin is known, and the closer the origin of the material is to where you want to plant, the percentages of long term success increases exponentially.

RULE 7 - Plant full-sun species in full sun, and shade species in the shade. Generally, with California native grasses, the full sun species like Nassella and Melica, when commercially cultivated, yield less seed per acre, so consequently cost three to four times higher than the shady-forest grass species like Bromus or Elymus which are higher seed producers.

RULE 8 - NEVER PLANT EXOTICS or naturalized species, which are all the plants that are in the light-faced type in the Jepson Manual : Higher Plants of California, published by the University of Cal.Press. - Some exotics can persist as weeds, and along roadside could violate the President's Executive Order 13112 on Invasive Species.

RULE 9 - Always take at least one soil sample from the site, and conduct a soil nutrient test, and get recommendations on what materials need to be added when you sow your seed. For a list of soil testing labs, see http://www.attra.org/attra-pub/soil-lab.html

RULE 10 - Always use organic sources of nitrogen or phosphorus if soil nutrient test indicates either nutrient needs to be added.

RULE 11 - Always sow a minimum of 50 pounds of pure live seed per acre, unless you have conducted test plots which indicate that you are able to achieve success at another sowing rate.

RULE 12 - Always sow single species. Never sow a seed mix unless the mix has been previously shown from your own test plots to succeed.

RULE 13 - You can sow more than one species at a site, but they need to be sown in individual swaths. One of the added advantages of sowing individual species is that your native plant seedlings can be identified upon germination, and be told apart from any weed seedlings.

RULE 14 - Always evaluate your planting 30 days and 60 days after sowing. You need to see the following:

If all of these objectives have not been achieved, in all parts of the site, or if the percentage of exotic cover is higher than 0.01%, then the exotics need to be managed and replaced with native seedlings at each spot where you remove an exotic seedling.

RULE 15 - Always evaluate a planting six months and one year later. You need to see the following:

If all of these objectives have not been achieved in all parts of the site, or if the percentage of exotic cover is higher than 0.001%, then the exotics need to be managed and replaced with native seedlings wherever you remove an exotic seedling.

THE FINE DETAILS - The things that can make or break you California native planting:

DETAIL 1 - Did you use the correct local species for the particular site?

DETAIL 2 - Did you use the correct genetic material or "ecotype" of local native species for the site? See picture of different genetic native material at http://www.ecoseeds.com/common.html

DETAIL 3 - Did you conduct numerous small-scale test plots on the site to trial out your proposed seed and seeding prescription? On some difficult sites, only one out of 25, or one out of 50 different seed and seeding strategies will end up succeeding. Here are photos of two test plots sown with the same seeds at the same time, and both plots received the same amount of water and light: 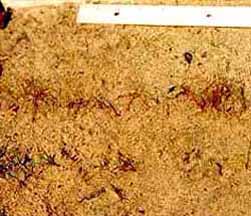 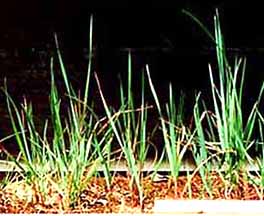 One the left, the seeds germinated and then died. On the right the native grasses thrived. This shows the value of trying at least two different planting strategies, and try some small test plots before you begin a large scale planting.

DETAIL 4 - Did you conduct a genetic identification fingerprint on the seed you purchased, so you know that it is the species and ecotype you wanted? See pictures of seed fingerprinting at http://www.ecoseeds.com/gels.html

DETAIL 5 - Could there be a soil problem that a general nutrient test did not detect, like toxic levels of trace elements, or a lack of fertility for the native seedlings?

DETAIL 6 - You did not conduct a seed-predation test, to see what animals at the site might eat your seeds (harvester ants, birds, harvester mice, etc.). If you had conducted a test and found your seeds taken away, you need to "pay the landlords": to put out some seed to the side of your planting so that the harvester animals will eat those, and you will probably need to hide your own sown seed better. California poppy seeds, for example, are a favorite food of Mourning doves.

To see details about how to get successful ecological restoration done, see http://www.ecoseeds.com/standards.html
Updated April 3, 2016. Back to Craig Dremann's main Contents page