2012 drought in India, Pakistan, the Sahel, USA and the Amazon caused by the atmospheric Arabia-Pakistan Dust Cloud.

September, 2012 - see July-August 2012
Best example of the "Butterfly Effect" from Chaos theory acting on weather, where bare soil creating atmospheric dust, causes droughts elsewhere on the planet.
This is the first time in history, where humans could develop the ability to manage weather extremes--floods and droughts--on a large, country-wide scale.
Copyright © 2012 by Craig Carlton Dremann, all rights reserved.
Permission is granted to copy and post any of these images or texts, or share them in any electronic medium, as long as the source is noted.
The Reveg Edge, Box 361, Redwood City, CA 94064 USA (650) 325-7333 email
See more details about the impact of the Dust Cloud at http://www.ecoseeds.com/cool.html, http://www.ecoseeds.com/floods.html, http://www.ecoseeds.com/GONU.html 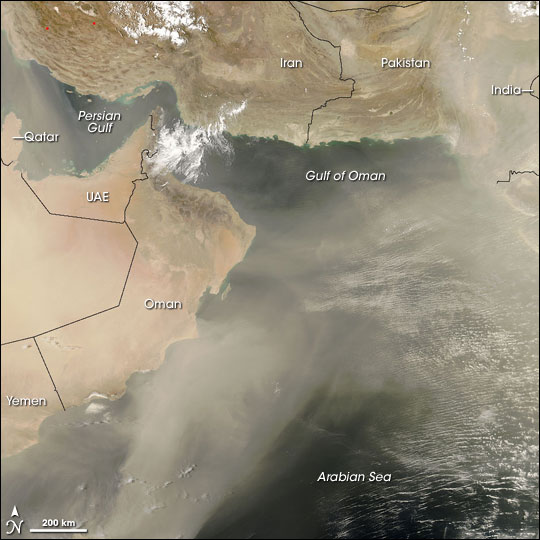 Awesome image of the Arabia-Pakistan Dust Cloud from NASA June 20, 2008,

Google <Pakistan dust cloud> and below are recent headlines from Pakistan:

December 22, 2011 ... A dense cloud of dust swept across southern Afghanistan and Pakistan on December 20, 2011. The dust was largely hemmed in by the Makran...

April 8, 2011 ... LAHORE - Commuters traveling on Main Boulevard, Garden Town are being exposed to severe health hazards because of a dense layer of...

April 29, 2011 ... LAHORE - Even from a kilometre away, a thick cloud of dust can be seen rising from the Kalma Chowk at Ferozepur Road, where Punjab's first...

May 20, 2012 ... KARACHI - A dust storm on Saturday evening reduced the visibility to almost 50 metre whereas the wind speed was recorded up to 36 nautical...

June 9, 2012 ... Dust blows off the coast of Pakistan, near the border with Iran... The Indus River Valley is barely visible through the thick dust cloud.

June 26, 2012 ... This image shows dust blowing off the coast of Pakistan. The Indus River Valley is barely visible through the thick dust cloud. Heavy dust storms...

The Pakistani portion of the Arabia-Pakistan Dust cloud is weakening today. A lot of monsoon moisture is building up over India and is bumping up against the weakening wall of the Dust Cloud at the India-Pakistan border, so there should be a watch for parts of Pakistan to potentially receive from heavy rainfall to floods in the next 24-48 hours?

Dust Cloud confines the monsoon in India and Bangladesh - September 4, 2012